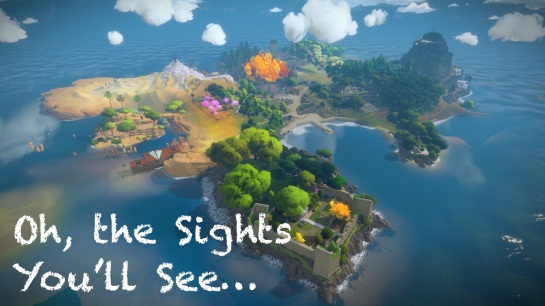 A Sight to Behold

I recently got the chance to review Jonathan Blow’s The Witness for AdventureGamers, and it impressed me so much I’m telling everyone I know about it! It isn’t in any way, shape, or form a follow-up to Blow’s previous game, Braid, other than the fact that, like its forerunner, The Witness will really and truly challenge your puzzle-solving skills to their utmost measures. END_OF_DOCUMENT_TOKEN_TO_BE_REPLACED

Maximum Family Games’ and Lightning Fish’s Kinect-based dance simulator, Let’s Dance, doesn’t really attempt to break any new ground in the quickly-saturated market of personal fitness trainers and groove-a-thon dance hall emulators. This genre already boasts at least a dozen Kinect entries, from Michael Jackson to Black Eyed Peas to several Dance Central and Just Dance variations. To be completely honest, there is only so much room for innovation when the basic idea is to move your body in response to on-screen cues. END_OF_DOCUMENT_TOKEN_TO_BE_REPLACED

When promising indie title Dust: An Elysian Tail received the distinction of winning Microsoft’s “Dream. Build. Play.” challenge in 2009, it received the console manufacturer’s official backing, and now, three years later, holds the considerable honor of topping off and closing out the 2012 Summer of Arcade promotion. Not only that, but it comes on strong and impresses immediately with extremely light-hearted and colourful visuals, and an equally tongue-in-cheek sense of humor. END_OF_DOCUMENT_TOKEN_TO_BE_REPLACED

Throughout its tenure, Microsoft’s Summer of Arcade has been focused on providing titles of various genres during the school-free weeks for summer gamers. Amid a sports title, a survival-horror platformer, and a side-scrolling anime adventure, fans of online shooting mayhem have gotten a title just for them: 5th Cell’s stop-n-pop fragger, Hybrid. END_OF_DOCUMENT_TOKEN_TO_BE_REPLACED

It’s far from a secret: Alawar Entertainment have certainly stumbled upon a winning formula for their hidden object adventures, and consequently each new title, while not exactly innovating, certainly meets the mark to please fans of the genre. Eternal Journey: New Atlantis is no different; in fact, credit needs to be given to the design team for going a bit beyond the call of duty and adding some much-appreciated scientific depth and explanations, where other games would simply expect the audience to swallow improbable settings and events wholesale. END_OF_DOCUMENT_TOKEN_TO_BE_REPLACED

One might think that the general Pirates fever of recent years might have died away a bit since the release of the fourth movie last year, especially since films five and six are still in talks for back-to-back shooting (must be the new “in” thing). However, German developer Piranha Bytes and publisher Deep Silver have hedged their bets that this isn’t the case…with regrettable results. What they’ve delivered sounds like an RPG player’s dream-come-true on paper (and, indeed, showcases many praiseworthy elements), but is ultimately brought to sink upon the jagged and treacherous reef of some questionable design decisions like an unlucky schooner out at sea. END_OF_DOCUMENT_TOKEN_TO_BE_REPLACED

This blog is an attempt to give a voice to random thoughts, new and old; opinions, gripes, and completely unsolicited judgments; and anything else I might feel like putting a few lines of text to. Hopefully you'll find something here that strikes your fancy.